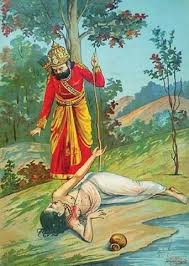 Image
This is a story of warning. It does not matter who you are or where you come from. Whether you are a king or a peasant, your actions can have very serious consequences. So, it is important to be aware of your actions. Do not do things blindly or karma will catch up with you.

There once was a young boy who liked to hunt.
All the arrows he used were kept sharp, never blunt.

This boy was special for he was the king.
He was unknowing of what his actions would bring.

Into the jungle, he often ventured
For here he normally adventured.

He caught all sorts of four legged beasts,
But it never caused him sorrow in the least.

One day while in the forest he heard a rustle,
And he knew that he could not bustle.

For he sensed an animal was at the stream,
And what happened to him next felt like a dream.

He shot his arrow blindly at the unknown creature,
And when he came closer he could not believe its feature.

Before he even saw him he knew something was wrong
Because he heard a terrible cry that was long.

For it was not some animal, but a young boy.
He knew what he had to do next would not bring him any joy.

The news of this tragedy the king must tell.
He knew that his parents would not take it very well.

The boy cried to the king of his frets.
At this point he was getting the sweats.

He managed to tell the king of his homes location.
The king reflected the mess of his own creation.

The screams were heard far and wide.
Sadly, moments later he abruptly died.

It was worse than he expected when he arrived.
For the gift of sight the parents were deprived.

They hung to life thanks to their son,
But now that he is gone they know they are done.

These parents depended on their son for everything.
When they needed at any time, their son would bring.

Without this help from their son
They have no hope and will be undone.

The loss of a son is too much to bare
It is just completely unfair.

The king led them to the lifeless body for one last embrace.
The blind parents thought the king was a disgrace.

The parents screamed of heartbreak
For this amount of sorrow they could not take!

They could not help but be in disbelief.
The only thing that the poor couple could feel is grief.

The father pleaded for the king to slay him as he did his only child
For when he thought of life without his son he reviled.

The blind man stated that the king will know his sorrow not yet
But one day, one of his sons will be taken for his debt.

The body of their son they set ablaze,
And they joined the dancing flames without delay.

Let this story be a warning to those who act on pride. The king had no idea that he was taking a life of a human being, let alone three with just one release of his bow. If he would have weighed his actions maybe these four lives could have been spared. If he would have seen what he was aiming instead of shooting blindly. This child’s poor parents did not get the privilege to choose to see.
​
Author's Note:
I used the story Dasharatha's Karma as the base of the story King’s Karma. I simply reinterpreted it as a rhyme. I think that rhyme can really add to a story. I really like how rhyme adds whimsy to a story. That is why I am choosing to make all of my stories rhyme. Even though this story is darker and a more sad story the rhyming helps it feel a bit lighter. I really tried to show the parent's agony that their son was gone. Also, I wanted to show the parents’ hopelessness without their son whom they depended on.
I think emotion is key to a good story. That is one reason that Pixar stories are so successful. They are so good at making you feel for the characters.
​     I also added prose at the beginning and ending to help explain the moral of the story to ensure that the reader gets the message of the story. I am wanting these stories to be more child oriented. That is why the message is elaborated on. It also ensures that the story is coming across correctly.I also tried to play off the king “blindly” shooting and the parents being blind. The king has a choice while his parents do not.
​